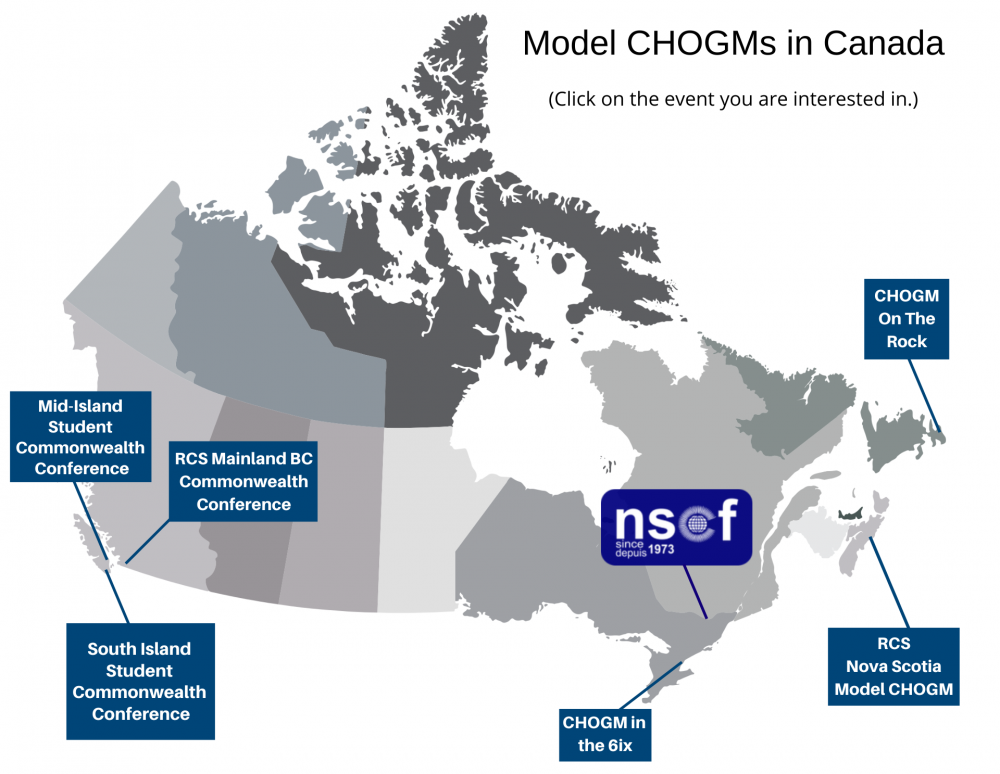 Held annually for over 36 years and founded by alumni of the NSCF, the South Island Student CHOGM welcomes high school students from across British Columbia to attend a day-long model CHOGM. The conference is usually held in the Greater Victoria area in late winter.

As part of the Branch’s efforts at community outreach, youth development and the promotion of global citizenship, they have for 36 years sponsored and promoted a Youth Leadership conference, based upon the Commonwealth Heads of Government meeting. It is one of the “Jewels in the Crown”, so to speak, and is something the Branch justly takes pride in.

Many people from the Branch are involved in, or participate in, these conferences. Attendees work in teams of two or three, representing a pre-selected Commonwealth member nation by researching and presenting its views, policies and stances on different issues and challenges.

This event occurs twice yearly, in November and April, in partnership with local and regional Model United Nations conferences, in order to promote the Commonwealth and its unique structure and history to interested participants.

Currently in the planning stages, CHOGM in the 6ix will bring the concept of the Model CHOGM to Canada’s largest city.

Organized for the first time in 2017, RCS Nova Scotia youth members hosted a two-day model CHOGM at St. Mary’s University for high school and university students. Participants very much enjoyed the experience, and the Branch is interested in repeating the event in the future.

If you are interested in volunteering with helping organize a future event, please contact RCS Nova Scotia.

The program includes a debate on youth issues in the Senate Chamber, an amazing Commonwealth race through the streets of Ottawa, team-building, a cultural evening, presentations from subject-matter experts, and opportunities for one-on-one conversations with High Commissioners, Canadian MPs, and Senators. The capstone activity has Global Affairs Canada host a mock Commonwealth Heads of Government Meeting where teams of students, representing each of the Commonwealth countries, work together to listen, empathize, and build consensus towards a better future among the 53 Commonwealth countries. This is followed by a reception at the British High Commissioner’s residence and a gala dinner.

Submit an Expression of Interest – click here to receive the latest news regarding NSCF and to be advised when registration opens for the next NSCF, the first week of May in Ottawa, Ontario, Canada.

What is a
Model Commonwealth Heads of Government Meeting?

A model Commonwealth Heads of Government Meeting (CHOGM) challenges participants to act as the Head of Government or Foreign Minister of one of the 54 Commonwealth countries, to build consensus towards a better future regarding current global issues.

Model CHOGMS operate much like a model UN scenario, with individuals acting as the heads of government of Commonwealth countries and engaging in discussions as their country would. Critically, country representatives in a model CHOGM must reach a consensus on the issues discussed, adding a challenging element that is of great contemporary importance. To reach consensus in representing a country, it requires listening, empathy, and the adoption of more inclusive language given the varying political, economic, and social needs and capacities. This is a fun, active way of demonstrating how the Commonwealth works and allows students to actively participate in the learning process.

Can I organize my own Model CHOGM?

Yes! You are more than welcome to organize your own local model CHOGM.

There are many options to consider:

Upon request, RCS Ottawa can provide you with a resource package, access to online theme materials, and mentorship from NSCF alumni to help you organize a model CHOGM. They may also be able to connect you with anyone in your local area who has participated in or organized a model CHOGM in the past. Contact chair@rcs-ottawa.ca for more information.

CHOGM on the Hill

Open to Ottawa-area university and high school students, CHOGM on Hill provides a one-day CHOGM experience held in the Senate of Canada. This event happens yearly usually between January and March. It is co-organized by the Carleton University Commonwealth Student Association and MYCommonwealth.